Grushevsky 5 - "JOHN SHMORHUN: “WE HAVE TO THINK NOT ONLY ABOUT OUR FINANCIAL SUCCESS, BUT ALSO ABOUT SOCIETY” 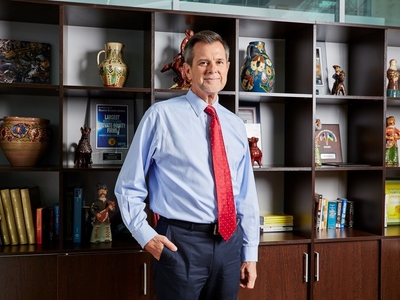 
The CEO of AgroGeneration John Shmorhun shared the key aspects to successful management of an agricultural holding, the effect of the VAT special treatment cancellation on agrarians, and the reasons why the land ban should not be lifted without certain legislative pre-conditions.

Q: Mr. Shmorhun, you’ve been recently ranked as one of the best-performing agricultural top managers in Ukraine. What is your key to successful management of such a large agricultural holding as AgroGeneration?

JS: The company’s success depends not only on the top manager, but also on its team. We are a strong team that shares and understands its mission. One of our common and most crucial principles is to treat our land and environment with care and respect.

As for the management style, I wouldn’t say that we are an ordinary Ukrainian company, because it has a bit of western influence. Besides me, the company also has other top managers who received MBA’s from major western universities. Though I am the CEO, the company is not managed based on the top-down approach, but rather follows a matrix management style. This means that the company has administrative clusters with their own level of responsibility and functional heads to help manage areas such as finance, legal, security, land, etc. The matrix system spurs every cluster administrator and functional head to treat his work with more responsibility. As for the top-down system, it is much simpler and follows only one principle “I command – you do”. Our company’s success lies in striking the happy medium between the two approaches.

Q: How did you acquire such a management style?

JS: I grew up on a farm in America. My father was a farmer, but treated it like a hobby. We did plant cultivation and cattle breeding. I had three brothers and we were a perfect workforce; it was slavery, so to say (laughing).

After school I went to the naval academy to become a naval officer and a pilot. Yet, a pilot’s lifestyle is no good ground for a family life – one has to go to sea for 6-8 months. I personally did it five times, but after I got married I decided it was no good way to continue with a family.

This brought me to DuPont. Plant protection was my domain – that’s how I found my way into agriculture. Yet, when I worked at the farm I never dreamt of being a farmer (laughing), I desired to be a navy man. I have driven farm equipment since I was 12 years old. I jumped behind the wheel as soon as my feet reached the pedals. My first tractor, so to speak, was International Harvester’s Farmall, which is produced by Case now.

My father taught me how to work and to be an honest moral person. As I was in the navy service, I learned from an admiral how to find balance and be a warrior in life. My mother contributed to it by teaching me Ukrainian. I hope that I am a good mentor for my family and business.

Q: Agricultural companies boom with innovations now. What about your company?

JS: That’s true, IT-technologies are ramping up, which is right. As for us, we are using the ERP-system (Enterprise Resource Planning). We also engage precision agriculture. At the moment, we are at the consulting and testing stage, because such projects are quite expensive. We cooperate with both international and national companies. Our intention is to launch one of the programs next year. Moreover, all of our vehicles, tractors, and combines are equipped with GPS-systems and other sensors, thus our dispatcher service can always track the location of the equipment and what towed machinery is in the field.

We want to grow not only in terms of the land bank, but also in terms of processing, which has a great potential. Where there is profitability, there will AgroGeneration be. Our philosophy is that we should not think of our own financial success only, but about our society, villages, and environment as well. We are a public and socially reliable company governed by these principles. Our company’s investors, including the EBRD, have their rules of the game, which we also support and comply with.

Q: Does your company encounter any struggles on the Ukrainian market?

JS: The main struggles relate to the land bank, the ban on the sale of land, and unfair competition. There will be no solution to the lifting of the ban, unless the state proposes a clear design and adopts relevant laws, as sooner or later the moratorium will be canceled.

There is also much tension around the lack of support from the state. Agrarians don’t feel it at all. Special VAT treatment was cancelled, cadastral appraisals are growing, and the load is increasing.

Why is it only about us? Because companies like ours are transparent, it’s easy to get a grip on us. But there are so many shadow companies that pay no taxes. I believe this is very unfair. Maybe it’s because they are forced to act like that, but there must be a broker tax base, which means moving out of the shadow economy. AgroGeneration alone won’t rescue all of Ukraine. Lifting of the ban today will lead to total chaos.

Besides, there are issues with logistics. Ukrzaliznytsia has a lack of grain wagons across Ukraine. A set of new limitations for the transportation of grain by trucks resulted in the increased load on Ukrzaliznytsia. This discord between Ukrzaliznytsia and the Ministry of the Infrastructure has to be resolved.

Q: Can the development of water transport mitigate such risks? What are its prospects in Ukraine?

JS: The prospects are delightful provided that relevant laws are in place. The idea is admired by many, but there is a big problem with the permit for dredging. The grain needs to be delivered to ports either in wagons, or in the vehicles. Yet the problem is not being solved. The government must invest in river ports

Q: In your opinion, should the land ban be cancelled?

JS: It should, but gradually. This should be a step-by-step process beginning with the state-owned lands. Today the cancellation of moratorium would inflict total chaos. There must be a tool that would introduce a transparent land market. The parliament has to work on laws and introduce them stepwise; then everything will be fine.

We don’t oppose the ban cancellation, we only want it to be fair and form no ground for money laundering schemes. You can’t just cancel it, because this may bring the story of the 90s back, when anyone could acquire corporate rights. The state has to develop a careful attitude towards both the lifting of the moratorium and those, who will have the right to buy the land. The market should have interested strategic investors, who will have access to land.

Q: What effect did the special treatment withdrawal have on your company?

JS: The withdrawal of the VAT special treatment surely had a significant impact. 10-15 % of profit was lost. I can’t understand this policy of the Ministry of Agriculture and Food. The prices were very low even before that. In order to be competitive, we need at least some kind of support, as do most farms in the west. Special treatment ensured it. Yet, at the same time, when I hear about subventions, I immediately reflect on possible problems, because our country doesn’t do that without corruption.

The best case is when the state does not interfere. The government has to work on repairs of roads, as well as on the upgrading of the old and the development of the new quality logistics system. Unfortunately, we have huge problems with infrastructure, which are not being resolved. One can not blame hostilities in the East for anything and everything. The issue is only about priorities and wisdom.

Moreover, many companies operate in the “cash mode”, in other words, businessmen don’t pay taxes and no one supervises it. That’s the place where the state should improve its system. We proposed taxation based on the operating hectares. This way regional and district administrations would be able to control their budget. In case the decentralization follows the right path and local communities receive access to the taxation base — we all will be the witnesses of positive developments. The taxation base has to be expanded too. In short, we have enough challenges.

In order to come to Ukraine, strategic investors need to see its advantages; they see nothing at the moment.

Q: The company sells around 30% of its production at forward auctions. Why did the choice fall on this strategy?

JS: We use forward contracts, because it’s a way of hedging ourselves (insurance – editor’s note). Does anyone know what the prices will be like in a year? No one knows it. Even traders can’t be trusted to know. No one knows what prices we’ll have next year. Of course, we have forecasts for sunflower, rapeseed, corn, and legumes, but it’s impossible to foresee the dynamics. Thus, without knowing the prices it’s better to do forward contracts. There’s a budget, there are budgeted forward prices, and we proceed with forwards.

Q: But there are risks too…

Q: In your opinion, what are the most promising crops for growing in Ukraine?

JS: The dynamics of promising crops may vary from year to year. Ukraine is the number one sunflower exporter on the market. This industry made great achievements and the crop is very promising. Number two is soy and corn, because proteins are the best feed. Number three is legumes. Whether you want it or not, but since Ukraine is a breadbasket, one can not but mention wheat. This is an ever-profitable crop with a steadfast market, which is controlled by Ukraine and Russia (the Black sea markets).

Q: Very often you get directly involved in the fieldworks, be it sowing campaign or harvesting. Why?

JS: This is a dangerous place for a manager (pointing to his chair – editor’s note.). You can’t just sit in there, you have to know the business from the inside and then go to the fields to see how it works. As Ronald Reagan once said, “Trust, but verify”. I personally talk to agronomists, because by sitting in the chair you won’t be aware of any deficiencies or a lack of some resources. Maybe, there is something we need to buy additionally, maybe we have issues with human resources – one has to have a good sense of it. I grew up on a farm and know that this is a very hard work.

Photos provided by the press service of AgroGeneration

The article was originally written in Ukrainian and translated by AgroGeneration