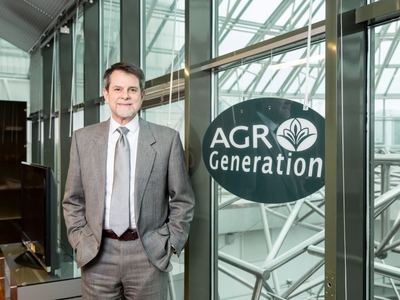 
How the money of western corporations operates in Ukrainian agribusiness? Landlord has gathered up four of the most exemplary cases.

At the beginning of 90’s the American with roots in Ukraine John Shmorhun moved from USA to Russia in order to run DuPont’s representative office. For many years he’s been keeping an eye on agricultural companies in the neighboring Ukraine. He liked what he saw. In 2008 Mr. Shmorhun seized an opportunity to work in the Ukrainian agribusiness.

Michael Bleyzer, the founder of the SigmaBleyzer investment foundation, helped him with that. He suggested his old friend Mr. Shmorhun to develop a new investment project – Harmelia agricultural company. The holding eventually consisted of five companies with an overall land bank of 75 000 ha.

“WE STUDIED THE SECTOR FOR ABOUT TWO YEARS,” RECOLLECTED VADIM BODAYEV, DIRECTOR OF THE SIGMABLEYZER FOUNDATION IN UKRAINE. “WE ENTERED THE BUSINESS RELATIVELY LATE — BY 2008 ALMOST ALL ATTRACTIVE ASSETS HAD BEEN DISTRIBUTED AMONG LARGE HOLDINGS.”

The Foundation invested around $100 million in Harmelia. The new company’s core business was crop farming. In 2013 Harmelia merged with French AgroGeneration. Mr. Shmorhun was put in charge of the consolidated Group. “We wanted to expand our land bank and diversify risks,” explained John Shmorhun. Why did the choice fall on AgroGeneration? The company had an aggregate land bank, a transparent structure, and its shares were listed on the Alternext of NYSE Euronext in Paris. Thus, the new Group’s cultivated land increased up to 120 000 ha. At that moment, the Foundation intended to invest 80 million euro in its own agribusiness.

However, along with the land, elevators and machines, the new owner also received debts of the French company. The consolidated debt amounted to more than 85 million dollars and the negative EBITDA was around -23 million euro. In order to balance the situation, Mr. Shmorhun had to reduce expenses and change the sowing structure by increasing the area cultivated under the high-yield crops, such as wheat and sunflower. Only in one year AgroGeneration’s EBITDA grew to EUR 20.7 m. The company was able to resolve the issue of the working capital financing.

The first thing Mr. Shmorhun did after the merger was to get all processes in the company under control. He appointed a financial director to financially control all farms, introduced the security service, and set up a dispatcher service for round-the-clock computer monitoring (GPS-controlled equipment). The KPI assessment system was introduced to identify the best performing employees. Many top and middle managers came from SigmaBleyzer. John Shmorhun has his own KPIs. “After analyzing all indicators within a span of several years, we have developed the rate of revenues per hectare and of expenditures for every farm,” said Mr. Shmorhun. “This allows us to understand what the company will look like in the long-term perspective.”

Mr. Bleyzer is quite happy with the way the project is going. In his opinion, Ukrainian agriculture has high potential. “When the war ends, the money inflow will be so high that the country will be producing 100-150 million tons of grain per year,” stated the foundation’s owner. He sees the processing of agricultural production and its delivery to external markets as very promising. Yet it will take efforts to develop exports. “In 2016 nearly half of our grain will be exported,” stated John Shmorhun. SigmaBleyzer has already invested $140 m in the development of its agricultural holding, and it’s not about to stop. In the nearest future the company plans to build elevators in the west of Ukraine, as well as to develop crop farming and expand its land bank. In Mr. Bleyzer’s opinion, the investment climate in Ukraine is much better now than 20 years ago. The investors, who’ve come to Ukraine long time ago, like doing business here, even though they know that it takes hard work to take advantage of the opportunities.