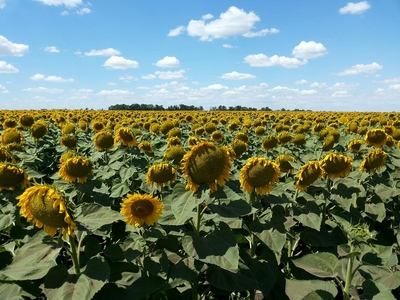 Ukraine hryvnia expected to hold at level of ~22 to dollar this yr and in 1H 2016 as macroeconomics improve, John Shmorhun, CEO of farming co. AgroGeneration, says in interview in Paris. Shmorhun “much more confident” about Ukraine economy than at same time yr ago; country “is getting ready for investment”.
* NOTE: AgroGeneration farms ~120,000 ha in Ukraine
* Ukraine “still has a long way to go”
* War in east is turning into frozen conflict, isn’t preventing Ukraine from trading
* National Bank of Ukraine’s tighter rules on capitalization resulted in “big clean-up process taking place in Ukraine in terms of the banking sector, which is a good thing.”
* Drought in west, center of Ukraine had “considerable” impact on corn yields; corn crop may be ~20m mt
* Drought and low corn prices caused “double whammy,” cos. in Ukraine that use U.S. model of planting corn and soybeans were “severely hurt”
* Sunflowers, wheat, peas, soybeans, rapeseed to be among most profitable crops in 2016; more tightness in oilseeds than grain
* Co. may cut corn planting again in 2016, plant more soybeans and legumes; Shmorhun sees sunflower area down compared w/ 2014 due to crop-rotation constraints
* After record U.S. harvest, “I’m not very bullish on corn for next year”
* On wheat crop condition, “we won’t really know until March next year. If you’re not having rains now you can have moisture later, if you have a warm winter you can still have seedlings”